This website requires the use of Javascript to function correctly. Performance and usage will suffer if it remains disabled.
How to Enable Javascript
Can a President Bring “Change”?

Can a President Bring “Change”?

Should candidates promise “change” in political elections? Have they the power to deliver? How many remember their promises? 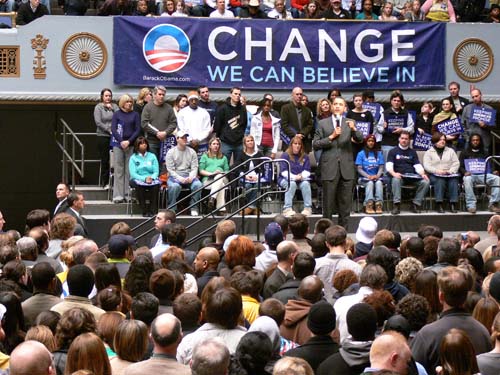 No, he did not perform miracles—float on air above the stage, as many seem to make him capable of doing.

But Democratic presidential hopeful Barack Obama did deliver (yet again) a passionate speech before an enthusiastic audience of supporters.

On Feb. 23, The Real Truth attended the “Keeping America’s Promise” rally held at the Cleveland Convention Center, where Sen. Obama addressed local Democrats to energize them for Ohio’s March 4 primary. The masses waved banners and cheered as the senator from Illinois painted a bullet-point picture of the ambitious goals he desires to accomplish if elected to the Oval Office. 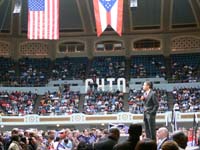 To take liberties with a popular tagline from an old E.F. Hutton television commercial, “When Barack Obama talks, people listen.” Thousands were absorbed in the senator’s message—the same stump speech he has given night after night in other areas of the country to whomever will listen.

Yet the Feb. 23 event was like a group of television viewers enjoying its favorite rerun of a beloved show: The audience knew what to expect and responded on cue to Mr. Obama’s memorable phrases—“from Wall Street to Main Street”—which played like a well-worn script. No surprises, no twists or turns in the plot. Yet electricity was in the air (though lacking an edge of spontaneity).

The campaign rally was lively—however, it was not the “messianic coming” that pundits practically gush about on cable news programs. Mr. Obama waxed eloquent, but produced no miracles; he is, after all, only human.

If one were to take the word of the national news media, you would have expected an event of “biblical proportions” to occur at the campaign rally. At previous rallies, Mr. Obama received applause merely for blowing his nose. So when he drank from a large bottle of water partway through his speech in Cleveland, one could hardly be blamed for expecting his supporters to break out in spontaneous euphoria.

They did not. After all, unlike what is being seen and heard from mainstream media, the crowd saw only a man—yes, one with lofty ambitions, drive and passion—but just a man. But this did not deter the thousands in attendance, who voiced their support for the man they consider “their next president.”

Before the rally, campaign volunteers revved up supporters by passing out white and blue placards, which bore the slogan, “Change We Can Believe In,” to eager attendees grabbing for them as they walked down the aisles of the balcony. Others stood in front of the speaking platform as they awaited the senator’s arrival, waving signs in English and Spanish, and chanting, “Yes we can!” or “Si se puede!”

Based on the current media buildup, one would expect every seat filled, with standing-room-only on the main floor, supporters huddled together shoulder to shoulder. Yet the balcony section was roughly 85% filled and about a third of the floor was empty—not what one would expect. Estimates place the total number of people in attendance at 6,800, relatively low for a venue that seats 10,000. Although the rally was televised, what viewers saw was not necessarily the whole story. (Granted, earlier in the day Mr. Obama spoke at a rally 40 minutes away in Akron, which overflowed with 2,000 extra supporters.)

The audience of young to middle-aged people of diverse ethnicities bore witness of Mr. Obama’s widespread appeal. Although he is often referred to as the “the black JFK”—having been born to a Kenyan father and a Caucasian mother from Kansas—it was clear he connected with all nationalities. While the audience was largely African-American, college students and parents of all races dressed in purple Obama t-shirts to show their support. In addition, more than 300 members of the Service Employee International Union (SEIU) were also present.

The “Hope” and “Future of America”?

“This is history in the making,” said Nisha Dotson, a Case Western Reserve law student, while waiting in line for concessions. She said it was the first time she was voting for a candidate she believed in.

Others had similar feelings.

“I think he’s sincere, he’s for real, and he’s my next president!” said one Cleveland resident while waiting for the rally to begin.

Others saw Barack Obama as being down-to-earth and in touch with their needs.

“He seems like a people’s president,” said another city resident.

Lamont and Danielle Wallace admire Sen. Obama as a person of principle and see him as someone who will actually talk about issues. Holding their infant daughter, they said they had both read his books—The Audacity of Hope and Dreams from My Father—and believe he can provide a future for their little girl. In particular, Mrs. Wallace said she feels that Michelle Obama, as a first lady with two young children, will push for reforms to help make workplaces more “parent-friendly.”

“I like diplomacy rather than war,” Mr. Wallace said. After living in Miami, Fla., for several years, the Wallaces said they believe Sen. Obama will be more likely to “sit down” with foreign leaders who have been shunned by previous U.S. administrations.

But others were not as impressed by the senator. One Cleveland resident and registered Republican, who attended in support of his wife, dismissed Mr. Obama’s desire to negotiate. “Our enemies may see it as a sign of weakness,” he said.

Despite the few Obama detractors in the audience, a certain feeling of optimism permeated the convention center. Even local government felt it.

“Senator Obama represents the hope of America,” said Cleveland Mayor Frank Jackson, who recently endorsed Mr. Obama. “He represents the future of America. And he is the only candidate that can bring us together and rid us of these things that divide us.”

That same hope continued throughout Mr. Obama’s speech. Cheers generated by a standing ovation reached a deafening climax as he entered the main hall and ascended the platform, shaking hands and smiling for cellphone cameras. Warmly greeting the local woman who introduced him, Mr. Obama took the microphone and waved up at the crowd in the balcony, which began shaking their placards even harder and screaming with delight.

Sauntering across the stage, the senator began to recall the beginning of his campaign—but he did not get more than five minutes into his speech before a strong voice yelled out, “We want change!” This was followed by intense cheering and the audience chanting the same phrase.

“Change does not happen from the top down,” he said. “It happens from the bottom up.”

That same campaign of “hope” and “change we can believe in” is resonating across America and in other parts of the world.

The Real Truth spoke to a journalist visiting from a small Austrian newspaper, and talked about Europe’s view of Barack Obama and its growing interest in the fall presidential election. He expressed that…

During the rally, Mr. Obama addressed his detractors who have labeled him a “hope-monger” full of “blind optimism.” Some have accused him of speaking “eloquent but empty” words, a charge he has recalled before many audiences. Throughout his speech, Mr. Obama acknowledged that “change is hard” and it would take a lot of work to implement the changes he proposed.

“Change only happens because of you,” he said to the crowd. “So this campaign is about you. About your dreams, your hopes, your courage, your readiness for change.”

He also rebutted others who have said he has his “head in the clouds” in regard to foreign policy. “I want to put an end to the politics of fear,” he said.

Lately, the senator has highlighted what he envisions for the nation:

Before leaving, he shook hands with members of the VIP section of the auditorium. People clung to him in a desperate attempt to hold the only hand that represents a new life of change for them.

After 20 years of Bush-Clinton-Bush, a growing segment of the American people desire something different—something new.

But will it be something better?

Mr. Obama is no miracle worker, to which he probably would be the first to agree. But his inspirational messages of “hope” and “change” are causing the eyes of the nation, Europe and the rest of the world to fall upon him. Can he—or any human being—live up to such towering expectations?