This website requires the use of Javascript to function correctly. Performance and usage will suffer if it remains disabled.
How to Enable Javascript
Whatever Happened to the “Roadmap to Peace”?

Whatever Happened to the “Roadmap to Peace”?

Another presidency, another plan for peace, another “rattling of sabers”—will war and violence ever cease in the Middle East? 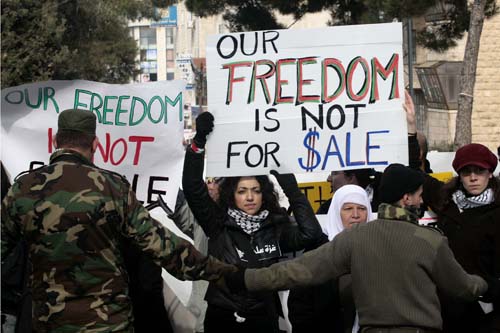 On Sept. 17, 1978, U.S. President Jimmy Carter negotiated a peace agreement—the Camp David Accords—between longtime enemies Egypt and Israel, leading to the 1979 Israel-Egypt Peace Treaty. It was to be a harbinger of better times for the Middle East. Finally, the dream of peace flourishing in the age-long volatile region infamous for war, terror and destruction was on the path to becoming reality.

Or so it seemed.

The Carter administration has come and gone, followed by presidents Ronald Reagan, George H.W. Bush, Bill Clinton and George W. Bush. Each administration, to varying degrees, tried its hand at establishing peace—ranging from the strength of words to the delicate dance of diplomacy, from economic incentives to compromise.

Still, centuries of senseless violence, death and destruction continue, and every despicable act of mayhem brings reprisals. Peace among Middle-Eastern nations remains out of reach.

History reveals that men know only three ways to bring about peace (or rather, a form of “peace”):

In each scenario, someone always loses. True peace, and the security, prosperity and justice that should derive from it, never spreads, never becomes universal.

Despite the brightest minds, the best intentions, eloquent speeches, and intense pressure from the U.S., the most powerful nation on earth, Jerusalem—which literally means, “City of Peace”—has and will continue to see only havoc. There will not be change, at least not by human hands.

Consider the American president’s tour of the Middle East.

In April 2002, President Bush unveiled his Middle East peace plan: “A performance-based roadmap to a permanent two-state solution to the Israeli-Palestinian conflict.” Diplomats and journalists referred to it as “the roadmap to peace.”

Devised by the U.S., the European Union, the United Nations and Russia, the roadmap was a three-phase blueprint designed to reach a peaceful settlement between the Israelis and Palestinians by 2005. The plan contained a step-by-step process calling for both parties to take certain actions to reach its eventual objective: The creation of a sovereign, independent Palestinian state, peaceably existing side-by-side with the nation of Israel. 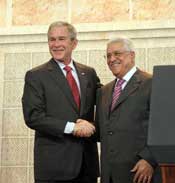 Fast-forward to January 2008: Though certain measures of progress have been made, affairs between Israel and the Palestinian people are far from peaceful.

With just a year left before a new president is inaugurated into the Oval Office, President George W. Bush embarked on an eight-day trip to the Middle East, visiting Israel, the Palestinian territories, Kuwait, Saudi Arabia and Egypt, along with several other allies in the Persian Gulf region. The tour was intended to be a rallying cry for continued pressure against Iran, as well as a call for supporting the peace process between Israel and the Palestinian territories in follow-up to the Annapolis Peace Conference.

Though internationally the tour was viewed through the eyes of doubt, suspicion and plain skepticism, Mr. Bush arrived in Israel to a warm reception, led by Prime Minister Ehud Olmert, a fellow sports fan, fitness enthusiast and challenged politician. Mr. Olmert, in his own way, shares Mr. Bush’s commitment to fighting the “war on terror” and opposing Islamic extremism.

The president’s visit to Israel and the Palestinian territories was intended to continue pressure for both sides to follow-through on their commitments to each other, specifically the first stage on the “roadmap to peace.” The plan calls for Israel to stop settlement growth, dismantle unauthorized outposts built by settlers since March 2001, and lift more travel restrictions on the Palestinians. It also calls for the Palestinians to start dismantling terrorist groups and to build the institutions of a functioning state.

“I’m under no illusions,” Mr. Bush said. “This is going to be hard work” (International Herald Tribune). He added that he would not impose terms on either country: “America cannot dictate the terms of what a state will look like,” but rather suggested that America would help and, whenever “a little pressure” would be required, he would be willing to provide it.

Despite political challenges for both nations, the Israeli-American relationship remains especially strong. In an interview last week with The Jerusalem Post, Mr. Olmert said, “President Bush is a giant friend of ours.” He added, “One of his most senior aides said that he doesn’t know of another relationship with similar intimacy, a bond of souls, as that between Israel and the United States.”

Still, the roadmap seems stalled—and some even wonder if it is dead.

Mr. Bush summed up the U.S. position on negotiations: “There should be an end to the occupation that began in 1967. The agreement must establish Palestine as a homeland for the Palestinian people, just as Israel is a homeland for the Jewish people. These negotiations must ensure that Israel has secure, recognized, and defensible borders. And they must ensure that the state of Palestine is viable, contiguous, sovereign, and independent.”

A keyword here is his use of “occupation.” He added that the borders must take into account the realities of today, but that the Palestinians deserved better than a “Swiss cheese” state fitted around Israeli settlements and security positions.

As for the issue of Jerusalem, Mr. Bush was not as clear, simply calling it “one of the most difficult challenges on the road to peace.”

Nevertheless, some Palestinians consider the U.S. President too strong of an Israeli ally to be impartial to both sides.

As Mr. Bush’s trip continued on to Kuwait, Bahrain, the United Arab Emirates and Saudi Arabia, the tour’s focus turned slightly to the issue of Iran. These Persian Gulf nations are especially nervous after the Jan. 6, 2008, confrontation between U.S. and Iranian ships in the narrow Strait of Hormuz. They are also concerned about the possibility of America going to war against Iran—a conflict that would almost certainly engulf the entire region.

In Abu Dhabi, Mr. Bush said, “Iran’s actions threaten the security of nations everywhere. So the United States is strengthening our long-standing security commitments with our friends in the Gulf, and rallying friends around the world to confront this danger before it is too late.”

Mr. Bush continued: “One cause of instability [in the region] is the extremists supported and embodied by the regime that sits in Tehran.

Iran is today the world’s leading state sponsor of terror”—supporting militant groups such as Hamas, Hezbollah and Islamic Jihad, the Taliban in Afghanistan, and Shiite extremists in Iraq.

“The other major cause of instability,” the president added, “is the extremists embodied by al-Qaeda and its affiliates.”

On the final leg of his tour, Mr. Bush raised concern over high oil prices in Saudi Arabia and the issue of democracy and support for the Israeli-Palestinian process in Egypt. He said that Egypt had “taken steps towards...democratic reform and my hope is that the Egyptian government will build on these important steps and give the people of this proud nation a greater voice in your future.”

However, relations between the United States and Egypt have been strained since the U.S. Congress suspended $100 million of the nation’s annual military aid to Egypt over the matter of arms being smuggled into the Gaza strip.

With his two-term presidency drawing to a close, Mr. Bush said, “I’ve got 12 months” to accomplish something in the region. Some suggest there are two likely paths: an attack on Iran, or a step forward in the Israeli-Palestinian peace process.

In any case, it is almost certain that Mr. Bush will return to the region before his term expires, most likely for Israel’s 60th anniversary.

Surprisingly, little international attention or support was evident for either the Annapolis Peace Conference or for President Bush’s tour of the Mid-East. One would think that the administrations of Germany, Russia, Japan and other nations would have been more vocal supporting Mr. Bush’s peace plan, or at least his efforts toward peace, since a peaceful and stable Middle East/Persian Gulf region would be in the world’s best interests.

Perhaps the moral authority of the United States has long been spent. Perhaps the significant nations of the world are waiting for a new authority to emerge—one that will force “peace” in the region.

As the Chinese Dragon awakens to renewed strength—as the Russian Bear growls, craving greater dominance on the world stage—the European Union continues its march to becoming an economic juggernaut and counterweight to America’s global interests. The U.S. will not always be the lone world superpower.

And nature abhors a vacuum…