This website requires the use of Javascript to function correctly. Performance and usage will suffer if it remains disabled.
How to Enable Javascript
Kenya’s Darkest Days: A Nation Beset With Violence

How could a poorly handled democratic election quickly plunge this relatively peaceful nation into chaos? What does this reveal about Kenya, Africa—and mankind as a whole? 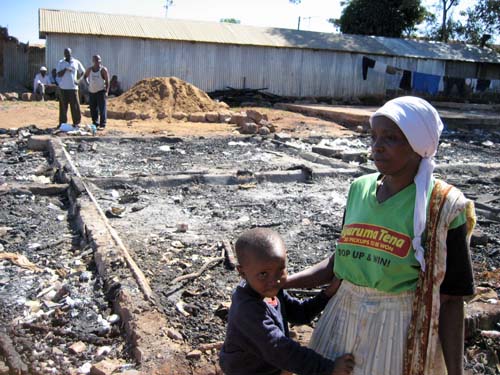 MCT
A 46-year-old mother of three, from the Kikuyu tribe in Nairobi, fears her neighbors may target her in the wave of tribal violence sweeping Kenya. “I hear people whispering in small groups,” she said. “I fear they will definitely attack us more and more.”

Election Day in Kenya, Dec. 27, 2007. Long lines of citizens patiently wait to pick up a ballot, mark off the candidates of their choosing, and drop the completed form into the ballot box. More than 30,000 local and international, accredited election observers scrutinize each phase of the process, working to ensure the vote is free and fair, even watching as each ballot is hand-counted.

The International Republican Institute, a nonprofit nonpartisan organization who monitored the election, initially commended Kenya in a press statement for “the peaceful manner in which Election Day was carried out.”

“However,” it stated, “voting is only one part of the process. The vote count and the acceptance of the results by the people are equally important.”

During the following hours and days, mobs armed with machetes and clubs roamed the streets, hacking and beating those who held opposing political views, and pillaging the areas they destroyed. Smoke from fires set by rioters mixed with retaliatory tear gas. Throngs of police wielding white batons and gray metal shields attempted to quell the unrest, firing live rounds, and beating rioters, onlookers or anyone loitering outside their homes.

The mobs left charred black frames teetering where villages once stood. A church was leveled in a fire, started after more than 50 people fled to it for safety, then were locked inside and burned alive.

The violence, which has been churning for over a month, has left over 850 people dead and displaced more than 300,000. The United Nations has stated that about 500,000 require urgent help. Many fear that Kenya will never acquire the relative peace that it once knew.

Blame for the violence has been pinned on a rigged election, stubborn politicians and ethnic tensions.

In only a matter of days, Kenya suffered a national meltdown. Held up as an example of a peaceful, developing African nation, this country has entered what have been called the “darkest days” since its 1963 liberation from Britain.

As the election drew near, Raila Odinga, the prominent contender against the current president, began to pull ahead in the polls. On the day of the vote, early reports declared Mr. Odinga the winner, but the official count declared that the incumbent, President Mwai Kibaki, had won by a mere 230,000 votes.

Mr. Kibaki, who was sworn in for a second term less than an hour following his electoral victory, was dismissed by Mr. Odinga, who asserts the election was a fraud.

International groups also question the results. The European Union and members of the African Union have expressed serious concerns about the nature of the election after reports surfaced that there were instances of voter inconsistencies in several large voting constituencies across Kenya. After meeting with both sides of the opposition, the United States envoy to Africa told the Associated Press, “Yes, there was rigging. I mean there were problems with the vote counting process...both the parties could have rigged.” 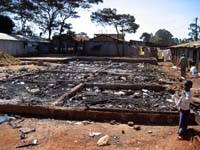 MCT
A child stands in front of the charred husk of a housing block in Kangemi, an ethnically mixed district of Nairobi, Kenya, which was torched by tribal mobs following the disputed presidential election.

Both Mr. Odinga and President Kibaki refuse to budge on how they view the results. It took the better part of a month for the two leaders to discuss the election-related violence. However, most saw this meeting as fruitless—a mere handshake and a photo opportunity. Still, Mr. Odinga refuses to accept his rival’s victory, demanding another trip to the polls. President Kibaki holds that the election was fair and there is no need for a revote.

There is another obstacle complicating Kenya’s move forward: Mr. Odinga’s party won 95 parliament seats, while Mr. Kibaki’s party won only 43. Kenya will be hard-pressed to make any political progress unless these two parties can reach a consensus on the election results and how to end internal turmoil.

However, this is not merely a political problem. Bands of young men brandishing bows and arrows and machetes—who feel Mr. Odinga should have won—roam the countryside terrorizing villagers who largely supported President Kibaki. Boys carrying sticks attempt to block main roads, crying, “If the election fails, violence prevails.”

Kenya has a long history of tribal tensions. In 2007, 300 people were murdered due to inter-clan violence, prior to the presidential election flashpoint.

It may be difficult for those in Western nations to understand nationwide unbridled acts of human nature resulting from one botched election. The blessings the West enjoys ensure that riotous violence rarely rears its head in such a complete way, making what is occurring in Kenya seem strange. However, it should not be.

News organizations and experts generally point to the political reasons and continuing tribal tensions as the source of Kenya’s current crisis. But this is not the case.

To best grasp the true cause of the crisis, we must look beyond the web of political wrangling and long-held intertribal grievances, and examine the very nature of human beings themselves.

One only has to look to Hollywood and literature to see what characteristics are inherent to the human condition—lust, greed, revenge and hatred, often lashing out with some degree of physical aggression. These bursts of violence drive nearly every plot ever written. And just as these fictional violent acts fill movie theatre screens, real violence fills the pages of newspapers and news websites from the world over.

The real life scenes in Kenya’s mob-ridden streets, still playing out daily more than a month after the election, illustrate this dark fact of humankind:

Violence is filling Kenya to the brim, with no end in sight.

History also is rife with examples showing violence is intrinsic to mankind. The last century was filled with such acts—the Holocaust, the Vietnam War, Tiananmen Square protests, genocide in Rwanda, etc. This list would be endless if one were to look back into the millennia mankind has existed. One such account recorded in the Bible shows that during the days of Noah, the entire “earth was filled with violence” (Gen. 6:11).

Scripture also reveals that mankind’s governments are leading humanity into the earth’s darkest days, that thousands of years of man ruling as he sees fit would result in a time that would be “as the days of Noah” (Matt. 24:37)—that in these days the earth would be “corrupt before God” (Gen. 6:11) and again would be filled with acts of violence—just like Kenya has become.

Human nature is defined in the Scriptures, detailing the reason for man’s long history of violence. The book of Romans explains, “There is none righteous, no, not one” (Rom. 3:10)—and reveals that mankind’s “feet are swift to shed blood: destruction and misery are in their ways: and the way of peace have they not known: there is no fear of God before their eyes” (3:15-18).

Said plainly, the capacity for violence and murder lies within all human beings! While this may seem a stretch for those in nations blessed with relative peace, it takes only one controversial law being passed, the killing of a citizen by a police officer or a natural disaster for riotous violence to surface even in these countries. In bleak times, violence boils over.

This human nature is a characteristic that no government system now in place can outlaw, or deter with tear gas, plastic shields or batons.

While recognizing mankind’s violent nature is helpful, as it identifies the cause of the problem, it is not a solution. Again, periods of lawlessness and violence have been seen throughout history and without a way to change man’s nature, these gruesome acts will continue to grow worse.

God’s solution for the times of Noah—which, again, typify the times in which we are now living—was to wipe out mankind, save a few. While He has promised to never completely do this again (Gen. 8:21), Jesus Christ will soon return to wipe out the governments of men, which are based upon human nature and have brought forth these dark times and the foreboding future. With these systems removed, a flawless government will be set in place. Coinciding with this monumental event, man’s violent nature will be changed, allowing peace, joy, equity and prosperity to flourish.

Quite a stark contrast to the present.