This website requires the use of Javascript to function correctly. Performance and usage will suffer if it remains disabled.
How to Enable Javascript
Hope for Zimbabwe!

As Zimbabwe teeters on the verge of total collapse, millions of lives are at stake—yet there is still hope for this African nation. 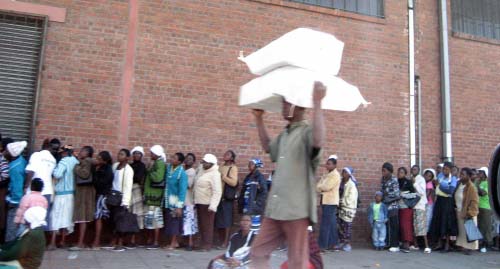 Bordering Victoria Falls, one of the seven natural wonders of the world, Zimbabwe has been a tourist destination for decades. In past years, the African nation of 13 million inhabitants has seen numerous news headlines hailing its growth, economy, education, literacy and development.

During the 1970s the country faced a bloody seven-year civil war, after which Robert Mugabe became the nation’s prime minister in 1980. Spirits were high, and the country was proud. That same year, The Plain Truth, predecessor of this magazine, stated that “peace in Zimbabwe is but a lull in a gathering storm.”

However, this will ultimately be replaced with economic security, universal prosperity and lasting success. But how?

Before taking a glimpse into Zimbabwe’s wonderful future, let’s first examine the bleak picture of its current condition.

Once considered the breadbasket of Southern Africa, food shortages are now rampant in Zimbabwe. The World Food Program, the world’s largest humanitarian agency, stated, “The poor harvest coupled with the worsening economic crisis will leave 2.1 million people facing food shortages as early as the third quarter of 2007—a figure that will rise to 4.1 million at the peak of the crisis in the months before the next main harvest in April 2008.”

The article added, “A government order slashing prices of all goods and services by about half in June [2007] has led to acute shortages of bread, meat, gasoline and other basic commodities in Zimbabwe, which is in its worst economic crisis since independence in 1980.”

In an Economist interview, a woman commented that to feed her family, she grows vegetables in her backyard as substitutes for the chicken, eggs and beef she can no longer afford.

Just a decade ago, Zimbabwe had the second-largest economy in the region.

But today, its economy is collapsing—superinflation has rendered bank notes virtually worthless. For example, toilet paper is more valuable than small Zimbabwean denominations. The government released the new 200,000 Zimbabwe dollar bill—which values one U.S. dollar on the black market—and can only buy one kilogram of sugar! The few who are employed (the national unemployment rate is 80%) earn money that is essentially worthless.

In an attempt to address the problem, the government decided in June 2007 to slash prices, forcing many storekeepers to sell products at a loss. This has contributed to widespread shortages of basic necessities. In some stores, citizens can no longer find items such as bread or meat.

A July 2007 Economist report described Zimbabwe as “an increasingly wretched place and, sadly, [it] will grow more miserable for some time yet…Years of economic collapse, provoked by dreadful misrule, have already taken a huge toll on Zimbabwean lives: The population has been battered by hunger, poverty and AIDS; some three million people are estimated to have fled abroad; life expectancy has dropped to medieval levels.”

Life expectancy among males has decreased from 60 years of age in 1990 to 37 today, with the life expectancy of females now at 34! This is one of the worst rates in the world—it means Zimbabweans live less than half the lifetime of most Westerners!

The Failed States Index, produced by Fund for Peace and Foreign Policy magazine, ranks Zimbabwe as the fourth most failed state in the world, only slightly better than Sudan, Iraq and Somalia. This index charts 12 different social, economic and political measures. In three of these categories, Zimbabwe is the most deplorable and unstable.

Millions of Zimbabweans have fled the country to South Africa. Some estimates have the number at three to four million. Some find jobs in South Africa that pay $142 USD on a monthly basis. This may seem like very little, but this is ten times a teacher’s salary in Zimbabwe!

Because only 20% of the populace is employed, four in five Zimbabweans are jobless.

One must wonder about those who are too poor to leave the country. Where can they go to find enough food for their families? What can they do to survive?

In a native dialect, Zimbabwe means “the great or big house built of stone boulders.” Today, that big house of stone has crumbled to its foundation.

Yet the nation will one day be supported by a greater “house,” with incorruptible foundations—a world-ruling government that will bring economic stability and give all Zimbabweans the tools they need to excel.

Political persecution in Zimbabwe is reportedly widespread. The leader of the opposition party was badly beaten in early 2007, sparking anger from the international community. Various human rights organizations report that political opponents are often imprisoned and punished without proper court procedures.

The Human Rights Forum stated that “legal and medical experts documented that cases of state-orchestrated torture on individuals rose to about four per day in the early part of the year” (Associated Press). Other reports, comparing the first half of 2007 to the first half of 2006, claim that gross violations of human rights have doubled.

Despite the horrific conditions in which the average Zimbabwean lives, the nation’s upper class lives quite comfortably—allegedly “bleeding the economy dry,” according to some in an Economist report.

The elite few—especially those attached to government bureaucracy—enjoy luxurious lives. As one opposition member stated, “The platinum mines can keep the core of the elite living in the manner they’re accustomed to—just in a sea of poverty” (New York Times).

Reportedly, many well-paid legislators think nothing is wrong in their country. There is no need for political change, they claim, because Zimbabwe is a democracy.

Meanwhile, millions of their fellow countrymen continue to suffer, subsisting in abject poverty and fearful uncertainty of what tomorrow will bring.

Why Does God Allow This?

Regarding the establishment of governments and their leaders, the Bible states that “the powers that be are ordained [appointed] of God” (Rom. 13:1). It also states that God “changes the times and the seasons: He removes kings, and sets up kings: He gives wisdom unto the wise, and knowledge to them that know understanding” (Dan. 2:21; see also 4:17, 25).

Why would the Creator allow such governments of men—monarchies, totalitarian states, brutal religious regimes, lascivious democracies—to rise to power? Why would He permit suffering to run rampant among innocent civilians and children? Why doesn’t God intervene?

The answer—which millions of professing believers fail to grasp—is simple: This is not God’s world. For the last 6,000 years of human existence, our Creator has allowed men to do “that which was right in his own eyes” (Judges 21:25). The lasting peace, joy, security, prosperity and sense of purpose that all long for continue to be an unattainable dream because human beings do not know how to govern themselves. Governments of communism, socialism, monarchies, dictatorships and democracies have all failed under the guidance of human hands.

Zimbabwe is no different. In some ways, it is a study in failure. 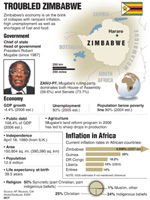 MCT
Troubled Zimbabwe
Zimbabwe’s economy is on the brink of collapse with rampant inflation, high unemployment as well as shortages of fuel and food.

The world today is grim—and the trends, ills and conditions will grow worse. The Bible states that man’s governments, economies, religious and educational systems, and everything that constitutes civilization, belong to “the god of this world” (II Cor. 4:4), who “deceives the whole world” (Rev. 12:9). Called the “prince of the power of the air” (Eph. 2:2), this great being influences the thoughts, attitudes and inner motives of humanity, steering mankind away from the awesome potential the true God intends for all people to achieve.

But the Bible also speaks of a “world to come”—a future age when humanity will no longer be enslaved to misery, hunger and suffering.

Just after Zimbabwe’s current leader was elected, Time magazine reported, “The long election lines at polling stations were filled with proud, determined voters whose sentiments were not hard to guess. ‘They have walked miles to come here,’ said a Rhodesian voting officer in one midlands village. ‘They’re all ages, disabled, crippled, blind. They say straight away who they want.’”

These people had hope, but it was dashed—destroyed. As one journalist in Zimbabwe said, “[The nation] has now become a monumental museum of failure. The air is fraught with frustration, with anger, with despair, and some people have just given up” (Frontline).

An awesome future lies just ahead for Zimbabwe—and for all nations. The following excerpts are from the book Tomorrow’s Wonderful World – An Inside View!, written by David C. Pack, publisher and editor-in-chief of The Real Truth:

Though the current situation for Zimbabweans is dire, hope remains. Man cannot solve his ever-growing problems, but his Creator can—and will! Today’s governments and their imperfect economies, educational systems and societies will soon be replaced by a perfect world-ruling supergovernment—the kingdom of God!