This website requires the use of Javascript to function correctly. Performance and usage will suffer if it remains disabled.
How to Enable Javascript
South Africa – Under Siege From Within

Under Siege From Within

A recent trip to South Africa reveals a land of stark contrast and an ever-growing need for hope. 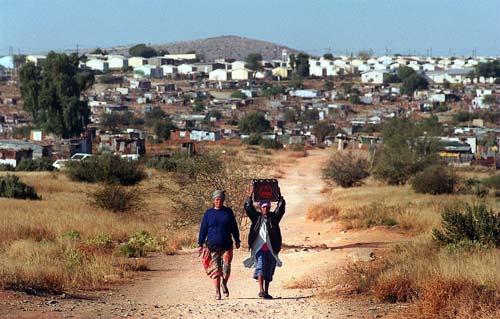 Johannesburg, South Africa – Seeing a small child playing in the streets of a slum in South Africa is an unforgettable sight. The difference in lifestyle compared to that of a Westerner is so great that it is hard to fully comprehend.

Yet no matter the circumstances, a child is still a child. Many children in this world may not have the latest set of high-priced sneakers—in fact, some have no shoes at all!—but children still manage to have fun in whatever state they find themselves.

Wherever you go on this earth you can almost always witness the type of simple, exuberant joy that beams from the face of a child.

But try to imagine this South African setting imprinted in the memory of any visitor: Tiny eight-by-eight-foot shacks, cobbled together from rusty pieces of corrugated tin. Looking across these endless crammed groupings of shacks, a splash of muted colors reflect from the pieces of metal and other materials that have been scavenged and used to put together this meager existence. But the color that stands out the most is a lifeless brown—coming from the dusty, garbage-ridden dirt between the “homes” and the rusted metal roofs. Often, you will see items on top of the tin holding it down—old vehicle seats and other car parts, rusted out bed frames, and stones. Smoke fills the air, rising from distant piles of burning garbage. There is no running water and often no electricity. Using a car battery to power a television for a few hours each evening is considered a luxury.

This is what millions call home.

Several contrasts particularly stood out in our eyes. South Africa is a story of great wealth and immense poverty—robust economies and faltering infrastructure—state-of-the-art healthcare and a widespread epidemic of AIDS—Mercedes-driving yuppies and endless intersections lined with beggars—peaceful, gated communities and rampant crime.

The BBC described it this way: “It’s an old truism that South Africa is a land of two realities. It has never been more than a short drive from lush gardens and shopping malls to tin shanties and open sewers.”

We experienced this firsthand.

Statistics Speak for Themselves

One visit to any country cannot provide the full perspective, background and context needed to understand the conditions there. However, South Africa has been the subject of international news for years. In the early 1990s, and previously, the nation hit world news because of the system of apartheid and the drastic change from it that followed.

Then, as the years progressed, other news came from South Africa. Stories of violent crime—rape, robbery, murder and mayhem—were commonly reported.

Consider some of the latest facts:

What kind of future does a child growing up in a South African slum have when she has a 25% chance of being sexually assaulted before reaching age 16? Innocence is being ripped away from children who deserve so much better.

Crime is reported daily, dominating the headlines. But because of the rampant crime, many incidents fail to be reported. Because of the poverty, many see stealing as the only option. One person broke the window of a car for a slice of pizza. A man was killed in Cape Town by an angry mob after stealing two bags of potatoes and a pumpkin.

MCT
Two men are frisked while walking in a residential area late at night.

On our first night in Johannesburg, we were confronted by a man at an intersection who wanted money. With luggage in the car, we clearly looked like tourists. After we declined, he continued to stare at us, his eyes cold and piercing. Later that night, it occurred to me that many in the depths of poverty must face the temptation to demand money instead of ask for it. A very fine line certainly crossed by thousands—at the expense of thousands.

What makes this problem worse is the senseless violence that accompanies it. People not only steal, they commit horrific crimes because they can—often killing the victim.

We learned that the streets and slums are filled with drugs, alcohol and guns. Reportedly, one can buy an AK-47 without any problem. You can also “rent a gun” with ammunition for one-time “needs.” Out of the 14 million guns that are estimated to be on the streets, only four million are legally registered (BBC).

MCT
A murder victim lies in the road as relatives and friends mourn.

As for rape, many don’t even consider it a crime. “In a related survey conducted among 1,500 schoolchildren in the Soweto township, a quarter of all the boys interviewed said that ‘jack rolling’—a South African term for recreational gang rape—was fun. More than half the interviewees insisted that when a girl says no to sex she really means yes” (ibid.).

In addition, sodomy is not viewed as rape; therefore, it incurs a smaller charge and sentence. To put it bluntly, men can never be the victims of rape, because of a ridiculous law.

To protect citizens from the rampant crime and to make people feel secure, South Africa has built what has been termed the “architecture of fear.” Houses are surrounded by walls, razor wire, high-voltage fences, burglary bars and security systems. Lives are shrouded in fear. And if they are ever tempted to forget it, the architecture of fear is a continuous reality check.

The Deputy President of South Africa recently asked, “When did South African society lose its morals?” (Cape Argus). She continued, “Why do some people get joy out of giving other people pain?…Has life become cheap?...Why is it that…the crime that we continue to grapple with is so violent?”

The reality is that human nature is violent. (To learn more, you may wish to read Did God Create Human Nature?)

MCT
Johannesburg (above) is home to many prosperous businesses such as the stylish Michelangelo Hotel (below).

While driving the highways of Johannesburg you immediately notice a sense of general disregard for certain laws. You can see a man on the side of a busy highway trying to stay warm near a fairly large fire. You can see children in the back of pick-up trucks speeding along. In some instances, cars do not stop at stop signs; they simply slow down.

This led us to ask, “Where are the police? Why can’t more order be achieved?”

A recent story in The Citizen highlights the problem. Titled “SA drivers high on the highway,” the article reports that drugged drivers are becoming a greater problem than drunk drivers. “Although the South African Road Traffic Act prohibits people from driving while drunk or ‘under the influence of a drug having a narcotic effect,’ drugged drivers have little to fear…The police simply do not have the resources to routinely test motorists for narcotics use.” 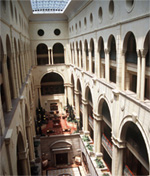 In effect, we cannot even know how big this problem is because the police are unable to monitor it. A spokesman for the Automobile Association claims that 1 in 16 motorists are drunk after dark, and as many as 1 in 10 are high. Since a system is not in place to charge these individuals, if someone is caught, he is simply required to sit alongside the road until sober!

During our travel to Johannesburg, we also heard that an entire section of the city was without power. It happened to be an area we visited just a few days later. The Citizen reported that “chaos erupted as the outage and other isolated outages struck the East Rand.” This instance is just one example of the country’s overtaxed electric system.

RCG
Despite the South African capital’s economic prosperity, many citizens continue to subsist in unthinkable conditions in surrounding shanties.

Does this mean that the government is standing idly by as all this crime occurs? No. Certain crime is declining. The economy is improving. Public debt has been cut by 50% since 1999. Electricity is being directed into townships that never had power. Also, South Africa remains a large player on the world scene and the dominant force in Africa, often mediating conflicts between countries on the continent.

Despite the obvious problems, the individual South African, just like any other person on earth, desires and is seeking a life of happiness and fulfillment. Many in South Africa turn to alcohol and drugs.

When asked about the change in South Africa in the last couple of decades, a woman stated, “There has been no change physically in my life, but I am optimistic” (BBC). On the other hand, many claim that South Africa’s crime problem is insoluble. Others claim there are still inequalities between races. But how will equality be achieved?

However, if nothing changes, chances are that innocent child in the slum may lose his or her innocence, growing up in a country of crime.

No man can solve all the problems of the South African. I close with a quote from The Real Truth magazine’s predecessor, The Plain Truth: “Even with the best of intentions, one can only help in a small way. But God has a plan that includes all the [South Africans]. And when it happens—and it will happen—all this will be just a memory.