This website requires the use of Javascript to function correctly. Performance and usage will suffer if it remains disabled.
How to Enable Javascript
Factory Farms – Are They Good for Consumers?

Are They Good for Consumers?

Do you know how the food you eat is produced? The answer may surprise you. 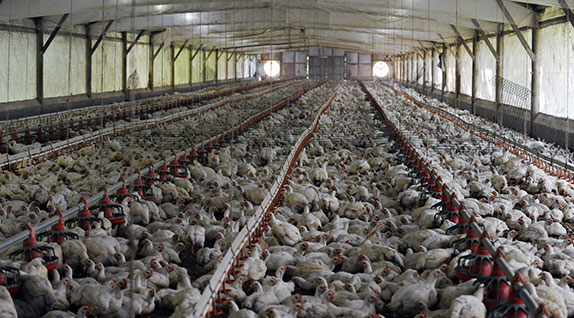 When you do your grocery shopping, have you ever thought about where the food you buy comes from? How is it produced?

Many advertisements depict food as coming from small family farms. They picture cows grazing in pastures, chickens hopping around the yard, and farmers planting small acreages of crops such as corn, wheat, potatoes, soybeans and barley.

But is this the type of environment in which our cows are raised, corn is grown, eggs are hatched, etc.?

No. The reality is quite different. Most of the food in supermarkets comes from large industrial operations, or “factory farms.” This food is produced in a manner drastically different from the past, when most food was produced by small family-owned farms. Since most of our food now comes from these factory farms, it begs the question: Is the food they produce healthy?

A factory farm produces huge volumes of food by industrial type operations. These food factories typically cover as many as several thousand acres. If it has livestock, it generally has several thousand animals confined in the same area. Because factory farms are so large, they achieve “economies of scale,” producing much more food at cheaper prices than smaller farms.

These farms are owned by giant corporations and operate purely on the profit motive, maximizing profits for their shareholders. Unlike small family farms, they usually do not have close connections to the communities in which they operate. Much of their produce is often sold hundreds and even thousands of miles away.

In developed nations, factory farms have expanded rapidly since their origins in the early 20th Century. So much so that in the U.S. only 3% of farms now generate an astonishing 62% of that nation’s agricultural output! In fact, they have so consolidated the agricultural sector that only five food retailers (Kroger, Albertson’s, Wal-Mart, Safeway and Ahold USA) account for a whopping 42% of all retail food sales in the U.S. And because they are able to produce food cheaper, factory farms are forcing several smaller farms out of business (according to Natural Agricultural Statistics Service, 330 farmers leave their land every week). Typically, they control all aspects of production, including animal rearing, feeding, slaughtering, packaging and distribution—a process known as “vertical integration.”

Indeed, factory farms have become so powerful that many are questioning whether they are beneficial to our society and environment. Because they wield such tremendous power, they have become a highly controversial topic.

Those supporting factory farming point out that it provides multiple benefits:

On the other hand, opponents of factory farming point out:

What is the Alternative?

An alternative to factory farming that has been touted is “sustainable farming.” With this type of farming, farms are smaller, crops are often grown organically (i.e., without chemical fertilizers), routine crop rotation is practiced, and the produce is sold in the local communities. Animals are pasture-raised, well-treated and live in conditions that are suited to their normal behaviors.

Supporters of sustainable farming claim it is more harmonious with the environment, and the food produced is healthier and more nutritious.

There are two basic ways of life, the way of “give” and the way of “get.” The way of give is the way of out-flowing love; it is based on what is best for others, helping and serving them, looking out for their best interests.

On the other hand, the way of “get” is based what the self wants. It is not concerned with what is best for others.

God’s Way is to produce food that is most nutritious for others while simultaneously keeping the environment healthy. It shows love and kindness to man and animal alike. It is not the “profit at all cost” approach.

Man’s greed in placing the profit motive above all else has resulted in environmental damage, in sickness and disease, and in the production of inferior food that weakens rather than strengthens the body.

You may be surprised to know that some of the issues addressed here are also addressed in the Bible, through God’s laws, statutes and principles, which regulate the care of animals, agriculture, property and ultimately one’s concern for his fellow man.

These divine laws and principles will be administered justly worldwide through the soon-coming kingdom of God. All will benefit from its equitable governance, which will enable everyone to lead healthy, happy, abundant lives.