This website requires the use of Javascript to function correctly. Performance and usage will suffer if it remains disabled.
How to Enable Javascript
Iran’s “Gift” of 15 Captured British Soldiers – A Sign of a Weakening West? 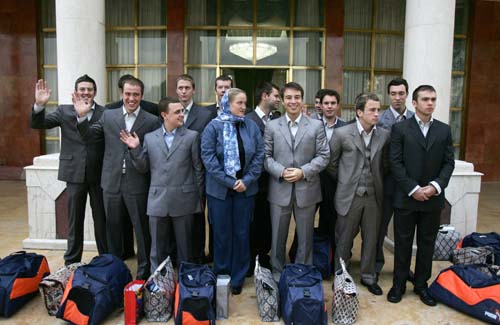 MCT
The 15 British sailors who were captured by Iran were released on April 5.

The 13-day drama involving the capture, detention and subsequent release of 15 British soldiers proved to be a test for Britain and other countries of the West—laying bare their character and revealing much about the future of the island nation and the rest of the world.

Upon their release, the soldiers were greeted with both pomp and criticism. Some welcomed them home, proclaiming their courage and treating them as heroes. Others found shameful the way the soldiers acted in order to secure their release.

These polarized reactions from both the public and media began immediately when the troops were captured. Some were angry at Iran and demanded their release. Some questioned the British officials in charge, finding their purely diplomatic response weak. Others proved to be indifferent. One U.S. military officer said that, under similar circumstances, American servicemen would have defended themselves.

Nonetheless, several questions arose and remain from this ordeal: How much should soldiers cooperate to save their own skin? And what do a soldier’s actions in this type of situation say about the country in which they are trained and paid to protect?

A War of Words

After being captured without a shot fired, the seven marines and eight sailors experienced 13 days of solitary confinement and psychological pressure, and were coerced into appearing in propaganda videos. The soldiers were pardoned by Iranian President Mahmoud Ahmadinejad, who declared their pardon and release an “Easter gift” to the British people.

The 15 navy and marine personnel told reporters they would be released if they admitted to being in Iranian waters. If they did not cooperate, they were told they would be put in prison for seven years.

The British government’s reaction to the capture called for the “immediate and safe return for our people and equipment.” British officials repeatedly condemned the actions of Iran, calling them “illegal,” and insisting on the soldiers’ innocence.

Other nations of the West supported British claims. American President George Bush called Iran’s actions “inexcusable behavior.” Angela Merkel, Chancellor of Germany and current President of the European Union, said, “Britain has the full solidarity of the European Union.” Both called for the soldiers’ immediate release.

Iran’s single demand was an official apology by the British government for trespassing into Iranian waters.

The hostages were shown on Iranian television, with the videos being aired around the world. The only woman in the group was recorded saying she and the others were captured because “obviously we trespassed into their waters.” She also remarked they were being treated very well, calling her Iranian captors “hospitable and compassionate.”

Letters from the female prisoner were also published. In one she even asked the British House of Commons, “Isn’t it time to withdraw our troops from Iraq and let them determine their own future?”

Soon after, Iranian television reported that every one of the captured soldiers admitted to trespassing into Iranian waters.

The Mindset of Today

Despite newspapers and citizens condemning the captured soldiers for being used to make propaganda and defaming their own country, they were simply following orders. British soldiers are trained to cooperate with their captors, though they are told not to reveal any secrets. This training seems to have taught them that writing letters defaming their homeland or saying whatever their captors want is acceptable—if they feel it will save their lives.

In generations past, soldiers were instructed not to give any information except “name, rank and serial number.”

This current situation seems to prove that cooperation pays off. All 15 made it home safely to family and friends.

But at what price? Will this policy of cooperation seep into the minds of soldiers and weaken the military? If soldiers simply try to save their own necks, how can an army—or country—function effectively?

Before announcing the unexpected release of the servicemen and woman, President Ahmadinejad awarded medals to the Iranian coast guards who captured the British troops. Mr. Ahmadinejad instructed the British government “not to question these [the 15 soldiers] or put them on trial for speaking the truth” (alluding to their admitting to being in Iranian waters). He pardoned the troops and announced their release to commemorate the birth of Muhammad. He then declared the pardon to be a gift to Britons. Iran alone decided when and where to release the soldiers.

In situations like this, it seems Britain and her allies can do little more than “demand” that the soldiers be released. Iran held all the chips. British officials could only sit and watch their troops apologize to Iran, criticize Britain and praise their captors—hoping that, with their soldiers’ complete cooperation, they would be released.

Generally speaking, all soldiers once had a deep pride and respect for their country. They would not hesitate to lay their lives down for it. In today’s world, the action of capturing British troops and holding them for 13 days is met with mere words. What happened to the soldier who would rather die than speak ill of king and country?

What is the price of reacting with words only, if you will not back them up with action?

British power is dwindling. America, its sister across the Atlantic, is also beginning to show obvious signs of decline. These once great nations will continue to diminish in military power and political might. Other nations are taking notice and are beginning to be emboldened to act against these countries in ways that even ten years ago were unheard of.

Britain continues to move away from reacting with force, using words instead. Theoretically, this should be the road to peace—using words instead of war—but as a country in this world begins to negotiate instead of standing up to fight, its enemies view this as weakness. The nation will lose its will to defend itself. Pride and power dwindles, other countries take notice and fear of retaliation disappears.

Citizens of both Britain and America largely do not support their government’s decisions and policies on how to fight the war on terror. In a democracy, if a nation’s citizens lose the will to fight, the government soon will too.

Consider these quotes from the book America and Britain in Prophecy, written by David C. Pack:

“Our national pride is being broken. The decline of Britain is nearly complete, with America to follow soon on her heels. Both these countries have lost their sense of national pride and honor in the extraordinary political, economic and military might they once enjoyed in such splendid grandeur. Now, we are hated, vilified, held in contempt by even the nations we once helped so generously. No matter our true intent or purpose, our motives are constantly impugned. The tiniest of nations no longer fear to spit on or burn the American flag. Insignificant nations now freely ridicule us.

“When we are castigated and excoriated abroad, or when our ambassadors and citizens are assassinated, or our embassies bombed, we merely issue anemic protests, crying ‘foul.’ Why?”

To learn more about the reasons for the great rise and imminent fall of Britain and the United States, be sure to read the rest of the book.