This website requires the use of Javascript to function correctly. Performance and usage will suffer if it remains disabled.
How to Enable Javascript
America’s Iraq War: Lost Before It Began

Four years have passed since the United States-led invasion of Iraq began—a war America lost before the first shot was fired. 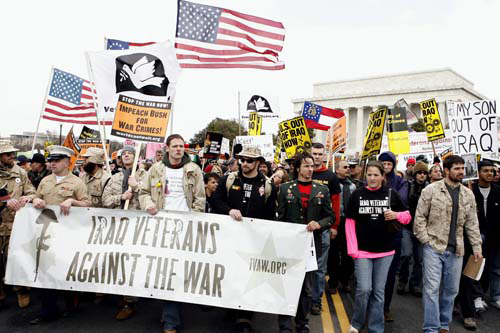 MCT
Iraqi war veterans lead the march against the Iraq War during an anti-war march from Washington, DC, to the Pentagon in Arlington, Virginia, Saturday, March 17, 2007.

The U.S. and Britain, with operational support from approximately 40 other nations, invaded Iraq and forced Saddam Hussein and his regime into hiding. Cities, towns and villages were liberated. A transitional government was set up. President George W. Bush gave his now-famous “Mission Accomplished” speech aboard aircraft carrier USS Abraham Lincoln. The world watched as Saddam Hussein’s statue was brought down.

Yet, America has lost the war.

Elections were held and a fledgling democracy was established. After his sons had met a violent end, Iraq’s former dictator was captured, tried, convicted, sentenced and executed.

Still, the war has been lost.

Government buildings, museums, banks and military depots were pillaged by Iraqi citizens, resulting in lost antiquities and substantial ammunition for insurgents. Vast caches of weapons of mass destruction have not been found. Baghdad and other key cities are suffering constant assault from mortars, snipers, rocket-propelled grenades, suicide bombers and roadside bombs. Cities were taken, then lost, then retaken. The same with neighborhoods. Police, statesmen and even those searching for work are subject to assassination. And long-held hatreds that were buried under the Hussein regime have been brought to the surface; Shia and Sunni friends are now bitter enemies.

America and her allies have not won the war in Iraq. In fact, it was lost before it began.

The vast majority of the American and British peoples are unaware their nations are linked together by an ancient past—and a prophetic future. That common link led to Britain becoming the greatest world-spanning empire in history, and the United States becoming the most powerful and prosperous single nation mankind has ever seen. The same link contributed to Britain losing its empire to the point that it is no longer called “Great.” And that same ancient and prophetic link is pulling the aging giant called America toward its deathbed.

A great promise was made thousands of years ago, one that provided awesome national wealth, grandeur, power and prestige. But conditions were attached to this promise—conditions that have not been met. America, Britain, Canada, Australia, South Africa and other key nations of the West have long enjoyed national benefits—but now are witnessing those benefits being stripped away.

The arm of America and Britain’s military strength was foretold to be unparalleled: “Behold, the people shall rise up as a great lion, and lift up himself as a young lion: he shall not lie down until he eat of the prey, and drink the blood of the slain” (Numbers 23:24).

In due time, because of this ancient promise, being invaded or losing a war became impossible—unthinkable: “And I will give peace in the land, and you shall lie down, and none shall make you afraid…neither shall the sword [military invasion] go through your land. And you shall chase your enemies, and they shall fall before you by the sword, and five of you shall chase an hundred, and an hundred of you shall put ten thousand to flight: and your enemies shall fall before you by the sword” (Leviticus 26:6-8).

Indeed, there was a time when the U.S. and the United Kingdom won wars, and always decisively. A time when nations trembled at the mere thought of drawing the ire of the American President or the British Prime Minister.

But that time is passing.

A recent CBS News poll reveals that only 25% of Americans believe the military can be effective in curbing the fighting between Iraqis; 45% say that Congress should block funding for more troops in Iraq; almost two-thirds oppose the President’s troop surge; nearly three-quarters believe the war is going badly; and nearly half say the war is getting worse.

But consider the number of U.S. troops lost in World War I, the Second World War, the Korean War, the Vietnam Conflict and the Persian Gulf War:

Yet, despite these figures, how many times have politicians, news pundits, protestors and opinionated celebrities called Iraq “Another Vietnam”? How long has there been a daily deluge of news reports essentially painting Iraq as the most appalling, miserable place or nation on earth? (The women and children being terrorized, raped, maimed and murdered in Darfur would disagree.)

The American people no longer have the stomach for war in Iraq; likewise, they do not have the heart for waging a never-ending global war on terror. Their disapproval of America’s presence in Iraq resulted in the U.S. Congress changing to Democratic control. Even President Bush no longer says, “America will win,” but rather, “can win.”

A growing “voice” holds to the idea that if America would just lay down its arms, leave Iraq (and, as many believe, stop siding with Israel in Middle East affairs), then Islamic terrorists will somehow “love” the U.S. again. But such thinking flies in the face of cold reality: Terrorists do not want peace; they crave power—and ultimately nothing less than religious power and authority over every human being on earth. It is doubtful that negotiations and talks of peace will deter their fervent desire.

But the peoples of America, Britain, Canada and others would rather focus on acquiring the “toys” of this morally degenerating world. Meanwhile, a “confederacy” of nations (Psalm 83; Obadiah 7) is gradually coming together in the background, and will play a significant role in the near future. A role the UK and the U.S. will regret.

To learn more about this ancient and prophetic link to nations, and what the future holds for the United States and Britain, read David C. Pack’s book America and Britain in Prophecy.

*Data are for the period December 1, 1941, through December 1946, when hostilities were officially terminated by Presidential Proclamation, but a few battle deaths or wounds not mortal were incurred after the Japanese acceptance of the Allied peace terms on August 14, 1945 (U.S. Department of Defense).

**Deaths include the period November 1, 1955 (commencement date for the Military Assistance Advisory Group) through May 15, 1975 (date last American servicemember left Southeast Asia)…Casualty records are updated annually, including deaths that are directly attributed to combat in the Vietnam Conflict (U.S. Department of Defense).