This website requires the use of Javascript to function correctly. Performance and usage will suffer if it remains disabled.
How to Enable Javascript
Iran’s Supreme Leader Vows Revenge Over Slain Scientist 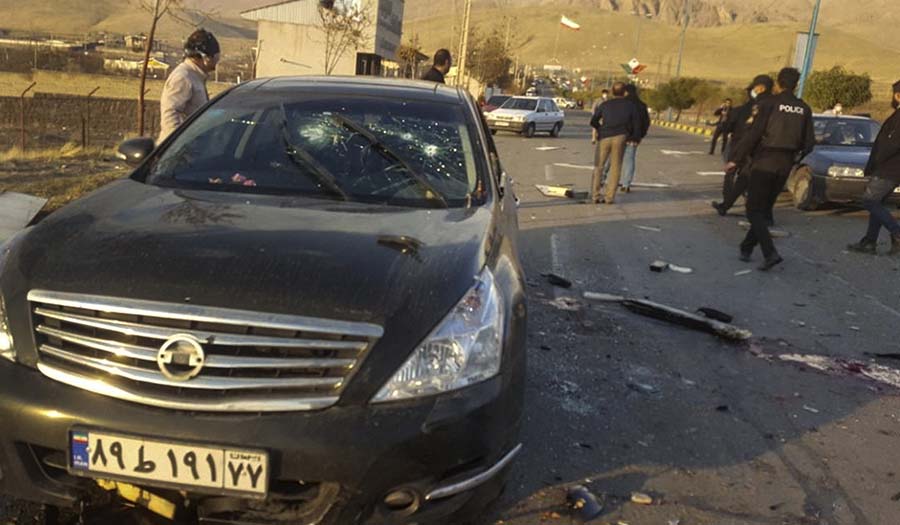 Fars News Agency via AP
This photo released by the semi-official Fars News Agency shows the scene where Mohsen Fakhrizadeh was killed in Absard, a small city just east of the capital, Tehran (Nov. 27, 2020).

TEHRAN, Iran (AP) – Iran’s supreme leader on Saturday demanded the “definitive punishment” of those behind the killing of a scientist who led Tehran’s disbanded military nuclear program, as the Islamic Republic blamed Israel for a slaying that has raised fears of reignited tensions across the Middle East.

Following the supreme leader’s comments, an opinion piece published Sunday by a hardline Iranian newspaper urged Iran to attack the Israeli port city of Haifa if Israel carried out the killing of Mohsen Fakhrizadeh, the scientist who founded Iran’s military nuclear program in the early 2000s.

Though the hardline Kayhan newspaper has long argued for aggressive retaliation for operations targeting Iran, Sunday’s opinion piece went further, suggesting any assault be carried out in a way that destroys facilities and “also causes heavy human casualties.”

Israel, suspected of killing Iranian nuclear scientists over the past decade, has not commented on the brazen slaying of Fakhrizadeh. A military-style ambush Friday on the outskirts of Tehran reportedly saw a truck bomb explode and gunmen open fire on the scientist, killing him and a bodyguard.

Kayhan published the piece written by Iranian analyst Sadollah Zarei, who argued Iran’s previous responses to suspected Israeli airstrikes that killed Revolutionary Guard forces in Syria did not go far enough to deter Israel. He said an assault on Haifa also needed to be greater than Iran’s ballistic missile attack against American troops in Iraq following the U.S. drone strike in Baghdad that killed a top Iranian general in January.

Striking the Israeli city of Haifa and killing a large number of people “will definitely lead to deterrence, because the United States and the Israeli regime and its agents are by no means ready to take part in a war and a military confrontation,” Mr. Zarei wrote.

While Kayhan is a small circulation newspaper, its editor-in-chief Hossein Shariatmadari was appointed by Supreme Leader Ayatollah Ali Khamenei and has been described as an adviser to him in the past.

Mr. Khamenei called Fakhrizadeh “the country’s prominent and distinguished nuclear and defensive scientist.” Mr. Khamenei, who has the final say on all matters of state, said Iran’s first priority after the killing was the “definitive punishment of the perpetrators and those who ordered it.” He did not elaborate.

Haifa, on the Mediterranean Sea, has been threatened in the past by both Iran and one of its proxies, the Lebanese militant group Hezbollah. Haifa, Israel’s third-largest city, is home to a major port and power plant.

Such a strike likely would draw an immediate Israeli retaliation and spark a wider conflict across the Mideast. While Iran has never directly targeted an Israeli city militarily, it has conducted attacks targeting Israeli interests abroad in the past over the killing of its scientists, like in the case of the three Iranians recently freed in Thailand in exchange for a detained British-Australian academic.