This website requires the use of Javascript to function correctly. Performance and usage will suffer if it remains disabled.
How to Enable Javascript
Mexico Farmers, Troops Skirmish over Water Owed to U.S. 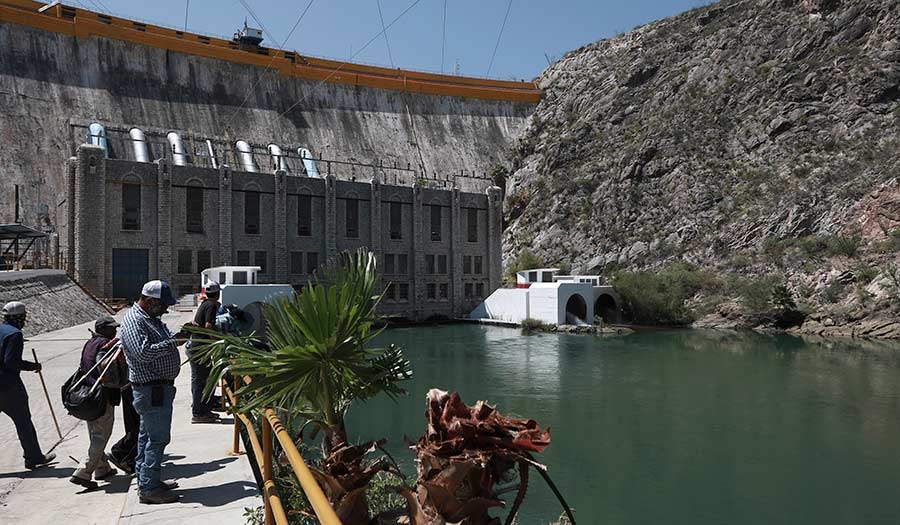 AP/Christian Chavez
Farmers stand at La Boquilla Dam, where they wrested control from National Guard troops in order to close the valves and reduce the flow of water toward the United States, in Chihuahua state, Mexico (Sept. 9, 2020).

MEXICO CITY (AP)—Mexican President Andres Manuel Lopez Obrador said Wednesday he would ask the Attorney General’s Office to investigate a clash between hundreds of farmers and National Guard troops at a dam in the northern state of Chihuahua and a subsequent incident that left two people dead.

It was the latest flashpoint in a months-long conflict over the Mexican government’s attempts to pay off its water debt with the United States over objections of local farmers.

The circumstances of the two deaths were unclear. The National Guard, which is largely made up of military police and soldiers, said it had arrested three people with tear gas projectiles and a gun magazine Tuesday night.

It said that when guardsmen tried to transport the three to the town of Delicias they were intercepted and fired on from several vehicles. The troops returned fire, and later found one person dead and one wounded in a vehicle. The second person died later at a hospital.

Javier Corral, the governor of Chihuahua state, said in a statement that the Guard was to blame and had “attacked” the couple, a man and a woman, who had participated in the protests earlier Tuesday.

“On their way back [from the protests] they were attacked by the National Guard, according to several witness accounts,” Mr. Corral said. “We energetically condemn these acts, as we condemn the use of violence,” said Mr. Corral, adding “this act will not go unpunished,” and calling on federal prosecutors to investigate.

Video from the clash Tuesday showed stick-and-rock-wielding protesters skirmishing with guardsmen in riot gear amid a cloud of tear gas. The guardsmen eventually pulled back and the protesters succeeded in closing the valves in the Boquilla dam to keep water from escaping the reservoir.

Assistant Public Safety Secretary Ricardo Mejia said the protesters had been passing out wooden sticks and gasoline bombs in soft drink bottles. He did not comment on the governor’s accusations.

Mexico has fallen behind in the amount of water it must send north from its dams under a 1944 treaty, and time is running out to make up the shortfall by the October 24 deadline.

In late July, demonstrators in Chihuahua burned several government vehicles, blocked railway tracks and set afire a government office and highway tollbooths to protest the release of water from local dams to pay the U.S.

Mr. Lopez Obrador has advocated paying the debt, noting that Mexico receives four times more water under the treaty from the Colorado River than it contributes in the Rio Grande area. The United States generally pays its water contributions regularly on an annual basis. Mr. Lopez Obrador claims Mexico has enough water in dams to supply local farmers and repay its debt, which built up over a number of years.

The issue is a difficult one for the president, who said he fears the U.S. government could impose tariffs on Mexican products or close border crossings in retaliation. Mr. Mejia said that “it would be very serious to have to renegotiate a treaty that is so favorable for our country.”

Mr. Lopez Obrador has said the protests are being fanned by opposition politicians for their own motives. The conservative opposition National Action Party has been involved in encouraging the protests, but Mr. Mejia said instigators also came from at least two other parties.

The expansion of water-hungry crops has meant that Mexico has used 71 percent of the northward-flowing Conchos River, while under the treaty it should use only 62 percent of the water, letting the rest flow into the Rio Bravo, also known as the Rio Grande, on the border. The amounts are determined over five-year cycles; the current cycle ends in October.

In the past, Mexico has delayed payments, hoping that periodic tropical storms from the Gulf of Mexico would create occasional windfalls of water. But while Hurricane Hanna made landfall in Texas in July, the storm’s rains did not reach far enough inland to fill dams in Chihuahua.

The U.S. section of the International Boundary and Water Commission, which oversees compliance with the treaty, said in a statement that “what happened at Boquilla Dam is unfortunate for everyone involved.”

According to its accounting, Mexico still owes 318,498 acre-feet to the United States that must be paid by October 24. That leaves almost an entire year’s normal water contribution to be paid in about a month and a half.

The water commission said that “at this point, it would be premature to say what would happen if Mexico ends the current cycle with a shortfall.”

Blanca Jimenez, the director of Mexico’s National Water Commission, said, “We are currently negotiating with the United States…a strategy to end the cycle correctly.”

Mr. Lopez Obrador has said he would personally appeal to U.S. President Donald Trump for “understanding” if it proved impossible to pay the debt.