This website requires the use of Javascript to function correctly. Performance and usage will suffer if it remains disabled.
How to Enable Javascript
Cease-fire Declared in War-torn Eastern Ukraine 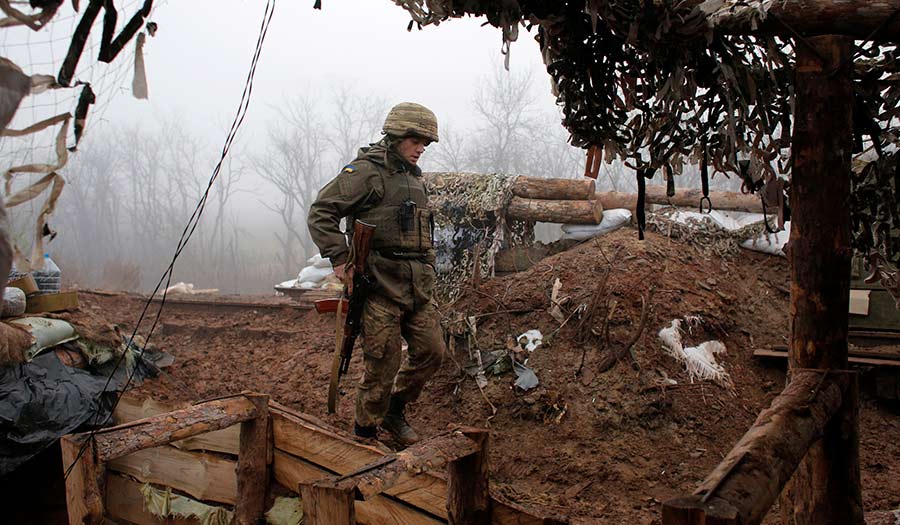 AP/Vitali Komar
A Ukrainian soldier takes position on the front line against rebel forces at the town of Novoluhanske, Ukraine (Dec. 9, 2019).

KYIV, Ukraine (AP) – Ukrainian and rebel forces in war-torn eastern Ukraine started preparing for a “full and comprehensive” cease-fire scheduled to begin at midnight on Sunday, a move that officials hope can lead to more steps to resolve the 6-year-old conflict.

Rebel officials said Sunday they have instructed their troops about the cease-fire and issued a decree banning the use of weapons. Ukraine’s military said their forces had “begun preparations” for the ceasefire.

If upheld, it would “pave the way for implementing other clauses” of the Minsk peace deal, the office of Ukraine’s president said earlier this week, calling the cease-fire a “breakthrough.”

Brokered in 2015 by France and Germany, the Minsk peace plan aimed to resolve the conflict between Ukraine and Russia-backed separatists that flared in 2014 after Russia’s annexation of Crimea and its support for the separatists. The conflict has since killed more than 14,000.

The presidents of Russia and Ukraine both commended the cease-fire deal in a phone call Sunday and underscored the importance of implementing the agreements reached at the December summit in Paris.

Mr. Zelenskiy in turn, stressed the need “for further practical steps” aimed at releasing Ukrainians who are imprisoned by rebels in eastern Ukraine, in the annexed region of Crimea and in Russia, according to a statement by his office.

The 2015 deal envisaged that Ukraine can regain control over its border with Russia in the separatist-held regions only after they are granted broad self-rule and hold local elections. The accord helped reduce the scope of hostilities, but Ukrainian forces and the rebels have continued to exchange artillery salvos and gunfire.

In December, the leaders of Ukraine, Russia, France and Germany met in Paris for another round of talks, expressing support for the Minsk deal and agreeing to revive the peace process.

Mr. Zelenskiy, who won the 2019 election on promises to end the conflict, wanted Ukraine to get control of its border first before local elections, but the Kremlin has insisted the deal should be implemented without revisions.

The new cease-fire deal was reached Wednesday by members of the Tripartite Contact Group that includes representatives of Russia, Ukraine and the Organization for Security and Cooperation in Europe, and was welcomed by EU officials.