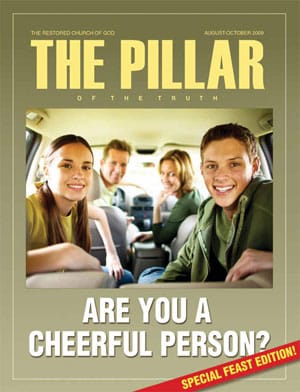 We could sum up all that God is doing on Earth, His entire plan of salvation, as ŌĆ£ItŌĆÖs all about people.ŌĆØ We know today He is working with only a few, calling and preparing them now to rule with Christ when He returns. Then, in the Millennium, we will work with a relatively small number, considering that only 10 percent of EarthŌĆÖs population will have survived.

Through the Millennium, GodŌĆÖs Work will greatly expand, with an ever-increasing number of people being called. Yet this number will explode during the Last Great Day, as God will work with the largest amount of people ever, making this the greatest time in His Plan. This should inspire all of us to learn more about this day, the events it depicts, and its importance.

In each of the past several Feast issues of The Pillar, we have studied one of the fall Feast Days. This year, we will study the seventh and last feast commanded by God: the Last Great Day.

This final Holy Day commemorates the time of final judgment and crucial events that follow the millennial rule of the kingdom of God on Earth. Some events include the Second Resurrection, followed by the Third Resurrection, and finally the time of the New Heavens and the New Earth. As we see end-time events unfold, it should be exciting and gratifying to ponder the prospect of qualifying for the First Resurrection, in which we will be pioneers and leaders in the Master Plan that God has laid out for eternity.

(2) Are there examples of ancient Israel keeping this day? II Chronicles 7:9. Did Christ keep the Last Great Day, and did He preach on that day? John 7:37-39.

In II Chronicles, the Feast of Tabernacles immediately followed SolomonŌĆÖs dedication of the Temple. After the eighth day, Solomon sent the people home, which was the 23rd of the month. The Last Great Day always falls on the 22nd of the month. This is ŌĆ£that last day, that great day of the feast,ŌĆØ as verses throughout chapter 7 of II Chronicles show. Israel kept this day. In John 7, we read that Jesus preached on this day, teaching its meaning and that the Holy Spirit will be given to those who will be resurrected at a future time. This is also clearly reflected in Ezekiel 37:13-14.

At that time, Satan is released for a ŌĆ£little season,ŌĆØ for a few short years. Since time will be cut short at the end of this age (Matt. 24:22; Rom. 9:28), God will allow Satan to complete his specified time of rule over mankind at the end of the Millennium. Once loosed, Satan and his demons will quickly deceive the world. Despite the truth being taught for 1,000 years, possibly millions will rebel and forfeit their opportunity for eternal life. Those who rebel will be destroyed, and Satan and his demons will be cast into the Lake of Fire, where they will no longer influence humanity.

Immediately after this, the Resurrection of everyone who has ever lived, but never knew the truth, will occur. This event is often called the Second Resurrection, or the White Throne JudgmentŌĆöa time of judgment, not a time of sentencing. Human beings will live in a millennial-like setting and experience firsthand the abundance and joy of living GodŌĆÖs Way. This will be their first opportunity to learn the ways that produce peace, prosperity and true happiness. Men will be judged not by what they did in their previous life, but what they do during this 100-year period.

These verses discuss the physical resurrection (showing that flesh will be restored to the bones and life given) of the whole house of Israel (vs. 11). This will be a type of all human beings, who are resurrected at that timeŌĆöthe vast majority who have ever lived, prior to the Return of Christ. It will also include multiple millions of the pre-Flood world.

People will live for 100 years, whether they begin as infants and grow to maturity, or as elderly people with health and vitality restored. This time of judgment will have similar conditions to the Millennium: every person who has never been called to salvation before the Return of Christ will be given his or her first and only chance. Living in this world of peace, abundance, health and happiness, nearly all will overwhelmingly treasure GodŌĆÖs way of life. This will be the largest number of people ever receptive to the truth and responsive to their teachers.

(5) What is the next event to occur after the White Throne Judgment? Revelation 20:13-14. Does the Bible reveal that those burned in this fire are totally consumed, in contrast to the false concept of hell? Malachi 4:1-3.

The Third Resurrection will be GodŌĆÖs final act of mercy for everyone who has rejected salvation; they will be eliminated forever. God gave man free moral agencyŌĆöthe freedom to choose according to his own volition. Tragically, a relative few will reject GodŌĆÖs Way, choosing to live in rebellion. Such people would be miserable if permitted to live throughout eternity. In His mercy, God allows them to perish in the Lake of FireŌĆöit will be as if they had never existed.

Those who have been accursed are awaiting the fate described in Isaiah 65:20 and Daniel 12:2 (latter part). People consumed in this fire die the ŌĆ£second deathŌĆØ (Rev. 20:14), from which there is no resurrection. This is also referred to as the ŌĆ£resurrection of damnationŌĆØ (John 5:29). Contrary to what false religions of this world teach, Malachi writes that those who are consumed leave ŌĆ£neither root nor branch,ŌĆØ as they ŌĆ£shall be ashes under the soles of your feet.ŌĆØ

(6) What are the categories of people who suffer this fate? Revelation 21:8. As the wicked are consumed, does this fire continue to purge and purify the earth? II Peter 3:7, 10-12.

(7) What is the next event to occur after Earth is purged with fire? Revelation 21:1. Does the Throne of God in the third heaven descend to the new Earth, where God the Father will also dwell? Revelation 21:2-3. Do we find the ŌĆ£new heavensŌĆØ and the ŌĆ£new EarthŌĆØ mentioned in other places in the Bible? Isaiah 65:17-19; 66:22; II Peter 3:13.

This world will be replaced with a new Earth, and become the throne of God and the center of the universe. Oceans and seas will no longer be needed, as those who have yielded themselves to God will be changed into spirit beingsŌĆöborn into His divine Family.

We are able to knowŌĆöunderstandŌĆöthe deep things of God (I Cor. 2:10). LetŌĆÖs look forward to the time of the new heavens and the new Earth, which God will bring to pass (II Pet. 3:13)ŌĆöwhen the last enemy will finally be destroyed (I Cor. 15:26) and death will no longer hold power over members of GodŌĆÖs Family.

These events depict that largest ŌĆ£generationŌĆØ of the new sons of GodŌĆöa time we should anticipate. LetŌĆÖs prepare now to be teachers and rulers on that last ŌĆ£Great Day,ŌĆØ when we will help all resurrected to have their opportunity to know GodŌĆÖs plan of salvation!